Our company "Burgas Taxi Transfer" offers you a taxi transfer services to and from Tsarevo in all areas of Bulgaria, as well as to Greece, Turkey and Romania.

Our professional drivers will meet you at the pick up point in Tsarevo and take you to the airport quickly and safely. 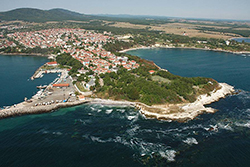 Tsarevo (Bulgarian: Царево, also transliteratedCarevo or Tzarevo; formerly known as Michurin,Bulgarian: Мичурин and Vasiliko, Greek: Βασιλικόν) is a town and seaside resort in southeasternBulgaria, an administrative centre of the homonymous Municipality of Tsarevo in Burgas Province. It lies on a cove 70 km southeast of Burgas, on the southern Bulgarian Black Sea Coast at the eastern foot of Strandzha mountain. As of December 2009, the town has a population of 5,884 inhabitants.

Underwater archaeological surveys have discovered amphoras from the Late Antiquity (4th–6th century) and import red-polished pottery made in Constantinople, Syria and North Africa, which indicates prospering trade in the area at the time. The city's southern peninsula has remains of a medieval fortress.

The town was first mentioned as Vasiliko by the 12th-century Arab geographer Muhammad al-Idrisi. Whether it existed during the First Bulgarian Empire is unknown. In the 15th and 16th century,Vasilikoz was an Ottoman port. According to 17th-century traveller Evliya Çelebi, in 1662 the town Vasilikoz Burgas comprised a square fortress on a ridge overlooking the Black Sea surrounded by plenty of vineyards. Although its cove was suitable even for the largest of ships, it was usually avoided by the seamen because it offered little protection from the powerful eastern winds.

Vasilikoz was featured in the Ottoman tax registers in the late 17th and the 18th century, as part of the kaza of Anchialos (Pomorie). According to theAustrian ambassador in Constantinople, in 1787 it was a town of 200 houses and a lively port. In 1829, another western traveller mentioned Vasiliko as a town of 220 houses, the main occupation of its residents being ship building and fishing. Another source lists its population in 1831 as 1,800 (with 434 houses).

The old town was located in the southern part of the cove, where the modern quarter of Tsarevo called Vasiliko is. In the first half of the 19th century, Vasiliko had a marine of 42 ships. There were 10 windmills and a watermill in the vicinity, and the nearby vineyards produced up to 6,000 pails of wine a year. There was a Greek school which was also visited by many Bulgarians, contributing to their partial Hellenization.

Book here Burgas airport transfers, transfer Tsarevo - Burgas, or any other direction and you will be fully satisfied by the decision.