Our company "Burgas Taxi Transfer" offers you a taxi transfer services to and from Sozopol in all areas of Bulgaria, as well as to Greece, Turkey and Romania.

Our professional drivers will meet you at the pick up point in Sozopol and take you to the airport quickly and safely. 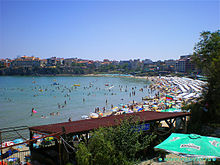 Sozòpol (Bulgarian: Созопол, Greek: Sozopolis / Σωζόπολις) is an ancient seaside town located 35 km south of Burgas on the southern Bulgarian Black Sea Coast. Today it is one of the major seaside resorts in the country, known for the Apollonia art and film festival (which takes place in early September) that is named after one of the town's ancient names.

The busiest times of the year are the summer months, ranging from May to September as tourists from around the world come to enjoy the weather, sandy beaches, history and culture, fusion cuisine (Balkan, Mediterranean), and atmosphere of the colourful resort.

Part of Burgas Province and administrative centre of the homonymous Sozopol Municipality, as of December 2009, the town has a population of 5,410 inhabitants

Sozopol is one of the oldest towns on Bulgarian Thrace's Black Sea coast. The first settlement on the site dates back to the Bronze Age. Undersea explorations in the region of the port reveal relics of dwellings, ceramic pottery, stone and bone tools from that era. Many anchors from the second and first millennium BC have been discovered in the town's bay, a proof of active shipping since ancient times.

The current town was founded in the 7th century BC by Greek colonists from Miletus as Antheia. The name was soon changed to Apollonia, on account of a temple dedicated to Apollo in the town, containing a famous colossal statue of the god Apollo by Calamis, 30 cubits high, transported later to Rome by Lucullus and placed in the Capitol.

The coins, which begin in the fourth century BC, bear the name Apollonia and the image of Apollo; the imperial coins, which continue to the first half of the third century AD, and the Tabula Peutinger also contain the name Apollonia; but the "Periplus Ponti Euxini", 85, and the Notitiæ episcopatuum have only the new name Sozopolis. In 1328 Cantacuzene (ed. Bonn, I, 326) speaks of it as a large and populous town. The islet on which it stood is now connected with the mainland by a narrow tongue of land. Its inhabitants, in the past mostly Greeks, lived by fishing and agriculture.

Booking.com
Book your transfer from the airport  and get great benefits:
Going to meet you, we have put the most optimal prices for airport shuttle service, and in addition to them we have a number of free services that are included in the order of transfer:

Book here Burgas airport transfers, transfer Sozopol - Burgas, or any other direction and you will be fully satisfied by the decision.