Our company "Burgas Taxi Transfer" offers you a taxi transfer services to and from Sofia airport in all areas of Bulgaria, as well as to Greece, Turkey and Romania.

Our professional drivers will meet you at the exit of a terminal in Sofia Airport with a sign with your names and take you to your hotel, airport or resort. You can be sure, we follow the flight delays and will meet you depending on your real arrival time. You will be transported with our taxi quickly and safely to your destinations. 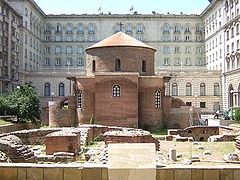 The city is located at the foot of Vitosha Mountain in the western part of the country. It occupies a strategic position at the centre of the Balkan Peninsula.

Sofia is the 15th largest city in the European Union with population of around 1.3 million people. It has been ranked by the Globalization and World Cities Research Network as a Beta− city.Many of the major universities, cultural institutions and commercial companies of Bulgaria are concentrated in Sofia.

Sofia's development as a significant settlement owes much to its central position in the Balkans. It is situated in western Bulgaria, at the northern foot of the Vitosha mountain, in the Sofia Valley that is surrounded by mountains on all sides. The valley has an average altitude of 550 metres (1,800 ft). Three mountain passes lead to the city, which have been key roads since antiquity, connecting the Adriatic Sea and Central Europe with the Black and Aegean Seas. A number of low rivers cross the city, including the Vladayska and the Perlovska. The Iskar River in its upper course flows near eastern Sofia. The city is known for its 49 mineraland thermal springs. Artificial and dam lakes were built in the twentieth century.

Book here Burgas airport transfers, transfer Sofia - Burgas, or any other direction and you will be fully satisfied by the decision.