Our company "Burgas Taxi Transfer" offers you a taxi transfer services to and from Burgas airport in all areas of Bulgaria, as well as to Greece, Turkey and Romania.

Our professional drivers will meet you at the exit of a terminal in Burgas Airport with a sign with your names and take you to your hotel, airport or resort. You can be sure, we follow the flight delays and will meet you depending on your real arrival time. You will be transported with our taxi quickly and safely to your destinations.

There is no extra charge for flight delays, airport charges and other expenses. Prices from airport Burgas listed on the site are final, no hidden fees and no extra charge! 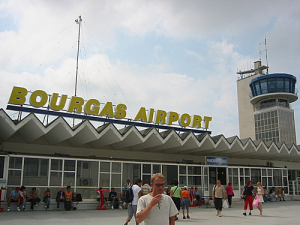 Burgas (sometimes also Bourgas, Bulgarian: Бургас, pronounced [burˈɡas]) is the second-largest city on the Bulgarian Black Sea Coast and the fourth-largest in Bulgaria after Sofia,Plovdiv and Varna, with a population of 200,271 according to the 2011 census. It is the capital of Burgas Province and an important industrial, transport, cultural and tourist centre.

The city is surrounded by the Burgas Lakes and located at the westernmost point of the Black Sea, at the large Burgas Bay. The LUKOIL Neftochim Burgas is the largest oil refinery in south-eastern Europe and the largest industrial enterprise. The Port of Burgas is the largest port in Bulgaria, and Burgas Airport is the second-most important in the country. Burgas is the centre of the Bulgarian fishing and fish processing industry.

Burgas is situated in the westernmost point of the bay of the same name and in the eastern part of the Burgas Plain, in the east of the Upper Thracian Plain. Burgas is located 389 kilometres (242 mi) from Sofia, 272 km (169 mi) from Plovdiv, and 335 km (208 mi) from Istanbul. To the west, south and north, the city is surrounded by the Burgas Lakes: Burgas,Atanasovsko and Mandrensko, which are home to several hundred bird species. Pan-European corridor 8 passes through the city, the European routes E87 and E773, and the longest national rout I/6.

The St. Anastasia Island is a part of the city.

Burgas Airport (IATA: BOJ, ICAO: LBBG), (Bulgarian: Летище Бургас, Letishte Burgas) and also known as Sarafovo Airport is an airport in southeast Bulgaria and the second largest airport in the country. The airport is located near to the north neighbourhood of Burgas, Sarafovo almost 10 kilometres from the city centre. Between the airport and the city centre is located the Lake Atanasovsko. The airport served Burgas and seaside resorts of bulgarian south coast.

Burgas airport has the fourth runway length on the Balkans (3200m) after Athens Airport, Sofia Airportand Belgrade Airport. The airport has also well established links to intermodal transport by land (road and railway) and sea. In 2014, the airport handled 2,530,368 passengers, a 2.0% increase compared to 2013.

So...go on, please book with us and give us a chance to show you why Burgas Taxi Transfer has grown from strength to strength over the past 7 years.